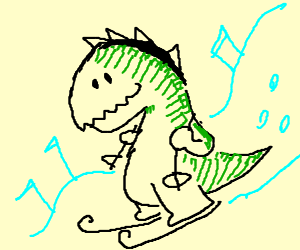 Every year there are lot’s of forecasts for the upcoming winter. As a ski shop owner I tend to want to scan all the various predictions until I find the ones I like. Every year SOMEBODY thinks it will be a good snow year. Sometimes it is the National Weather Service, other times it is the Farmers Almanac. Some years it could even just be Tim from Alameda who has a hunch it will snow a lot.

This year tall the forecasts seem to be similar- “HUGE EL NINO!” they are shouting. One newscaster last week even called it a “Godzilla” El Nino. I wasn’t sure how a huge Japanese monster had anything to do with yearly precipitation, but I am thinking Godzilla might be fun to ski with?

Anyway, it is hard to argue with the science behind it as I simply do not do my own ocean temperature monitoring. I just have to trust people that do it for a living. It is looking right now that it could be one of the strongest El Nino’s since 1950. That could be very very good news for us powder starved skiers here in the sunshine state! We were talking today about how much we have used our race skis the last few years as we mainly had firm snow to ski on. It would be nice to spend more time on the fat skis this year!

You can read more about El Nino’s if you are inclined here:

Whatever happens we will be here to help you have a great ski season. Boxes of goods are arriving every day. We open them, geek out at how cool it all is, and put it away for you to check out when you come in. We are currently getting ready for our big Fall Sale which starts on the 29th of August and runs through September 13. All the gear left from last year is at closeout “just get rid of it!” prices, and the 2015/16 stuff is on sale too with all of it’s shiny newness! Come on down and check it out. Gear up for a Godzilla year!