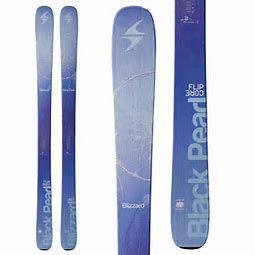 We recently featured the top selling Men’s ski of 2019/20. This post is about a ski that sold more than twice as many pairs! The Black Pearl 88 from Blizzard was the overall ski sales leader and has been for several years now. How has the Black Pearl stayed on top?

The first Black Pearl was based on a successful mens ski from Blizzard called the Brahma. The same molds were used and an additional smaller size mold was added for the ladies. Construction was the same as for the men except that the metal was removed to make it a bit lighter and less stiff. RThis is a cheap and easy way to build a women’s ski. Very common.

The Brahma was a really good ski (it still is). The Black Pearl just happened to be better. Women immediately flocked to these skis. They skied great. They looked great. They even had a great name. Wat was not to like? Boom- best selling ladies ski!

A few years later Blizzard made a bold move. Light weight was becoming a popular feature on Ladies skis. Blizzard had an ultra light core and construction used on their touring skis. They used the lighter core and a few other bits from the touring skis and surprise- they were even better according to female shoppers around the world. The 15% weight reduction only made them more popular.

So popular that Blizzard took advantage of the winning formula and built two new sister skis for the Pearl using the same technology. There is now a Black Pearl 82 and Black Pearl 97 to go with the original Black Pearl (now called the Black Pearl 88). All three are very good skis.

This next year you will see the third generation of the Black Pearl. It utilizes a new construction called “TrueBlend”. Most of the Blizzard all mountain line has been updated with the new “TrueBlend” core construction. That includes both Men’s and Women’s models. Guess what? The reviews are in and our crew thinks the new Black Pearl 88 is simply awesome! Absolutely better than the outgoing model. It looks like the Black Pearl will be a hit for at least another few seasons with this new version.

The Volkl Mantra M5 from part 1 had a few bad years and then came back strong. The Black Pearl has simply gained momentum year after year. That may be an even better way to stay on top- Start great and just keep getting better every generation. Sound like a good plan? It is. Sound like an easy thing to do? It’s not.

Our hat is off to both Volkl and Blizzard for building such great selling skis. A wide variety of ski offerings is key to any good ski shop. We try to stock diverse and excellent skis so that we can match customers to the perfect ski. Sometimes the perfect ski is one that does not sell a lot of units. It just happens to be perfect for you. Often the ski that is great for you is popular with many other skiers too. A lot of the time that ski happens to be a Manta or a Black Pearl.

We are the East Bay’s only specialty ski shop, specializing in custom boot fitting. We have been selling ski equipment–and ski equipment only–for the past 30 years. We are dedicated to assisting your purchasing decisions with the most highly trained, knowledgeable staff in the Bay; our mission is to ensure your skiing satisfaction!