This post comes from Joe Schmitt, one of our regular customers. Joe lives in Sonoma County and has been a regular customer of ours for a number of years now. Joe helped me connect with Peter Keelty, John Clendenin, the Clendenin Ski Method (http://www.skidoctors.com/ or phone 970.544.0300), and ultmately our association with the Realskiers ski reviews (http://www.expertskier.com/) and their related web site. Joe has spent a good amount of time learning from both John and Peter. He has attended John’s camps since 2002. This report is from his most recent experience.
Greg 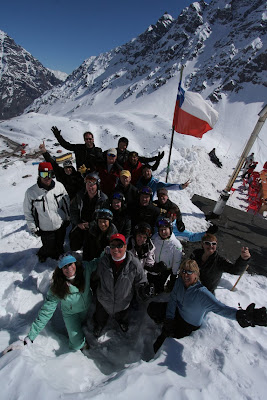 This was my third trip to Portillo and proved to be one of the most memorable as compared to the others. Conditions were excellent with ample snow coverage giving us the opportunity to explore the many off piste areas accessible by the lift system. The lack of weekday crowds provided for all the skiing we could manage, especially with the lifts operating until 5 PM. Nancy, and I were part of a group of 20 students attending the Clendenin Method ski week in the Andes.

We were split into three groups based upon skiing ability and enthusiasm levels, which were pretty high judging from the fact that most of us were on the hill on the first Saturday afternoon following a long overnight flight from the US.

A typical day would begin with a warm up run or two followed by intense drills emphasizing the skiing techniques particular to this program. During the afternoon we were on the steeps and bumps applying what we had learned from the able teaching staff.

There are some runs that actually drop down from either side of the valley into the frozen lake requiring a hike out and up to access the lifts. 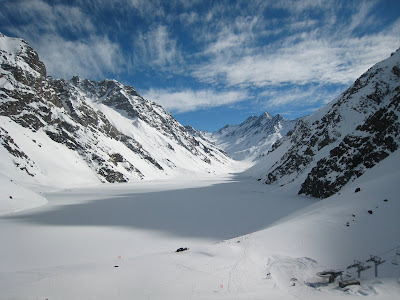 Some of the runs are so steep that the only lift system capable of withstanding the regular avalanches is a cable serviced multi-seat poma device that can be tricky to negotiate since you are riding shoulder to shoulder with four others. We enjoyed the US and Canadian world cup teams training while we were there. 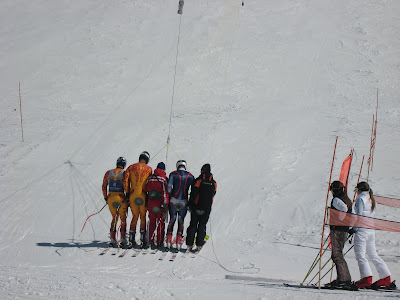 Several members of the group opted for a day of heliskiing making descents from 13000 feet in the shadow of Aconcagua which loomed above at over 22800 feet.
The slopeside hotel supplied us with comfortable rooms and three gourmet meals a day to fuel ourselves for the abundant amounts of vertical taken in. However, the lunchtime vista from a mid-mountain restaurant called “Tio Bob’s” proved to have views too incredible to pass up on clear days. 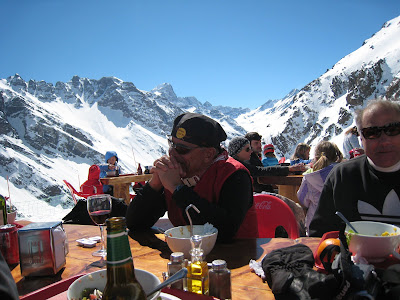 Finally finishing with a morning ski on the eighth day, we returned to Santiago for a final evening’s dinner with a lot of the people giving testimonial on the past week’s highlights and skiing breakthroughs, or as John likes to call them “epiphanies.” On Sunday, before flying home, we had a chance to take in some much needed hydration and carbohydrate replacement therapy. 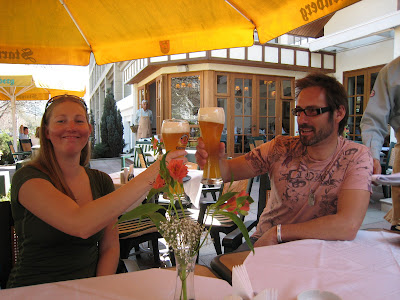 I have been skiing with John Clendenin since 2002, attending many of his ski camps and establishing a lasting friendship. Here we are sharing a moment in the South American sun. 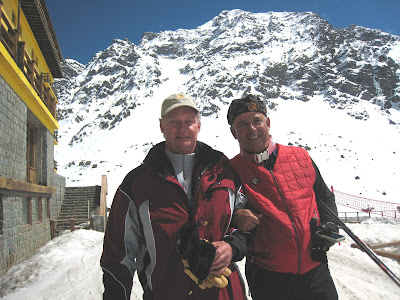 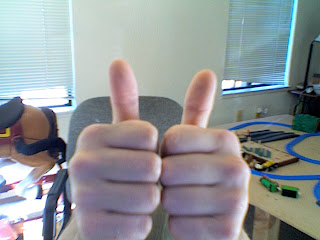 I gotta say that my demo day winner was the Stockli Stormrider XXL. One thing i always look for in a ski is that it is powerful. unfortunatly that means it is ussually heavy. this time i acttually found a very powerful ski that also skis fairly light. How you may ask. ISO core and Stockli. The ISO core is Stocklis answer to synthetic light weight skis. the ski hugs the ground like a race car with a big spoiler but is light in and out of the turn. At first i was a little apprehensive to take it, full speed throught the changing snow conditions of the day from soft and forgiveing to icy and fast, But the more i skied it, the more it showed me that it stays constitant through all of the conditions. It cuts through ice and hard pack smoothly and effortlessly, its unfaised by loose, skied out snow, but is still lively and energetic in and out of the turn. Stockli Stormrider XXL, two thumbs up from me!

Happy 50th birthday Greg. Hope you had a great day.

I have finaly made my decision of what skis to buy. I have a pair of Head IGS skis and a pair of Fisher Atua (96mm). As you can see i have only one pair of skis left before i can say i have a full quiver. My choices were the Stockli stormrider XXL, the Fisher Watea 84, and the Head M78. The Stormrider was just too expensive for me even though it probubly skis the best out of all of them. The Fisher is just a little too light and i already have a great pair of skis that are light and “hikeable”. So my decision is …..the Head M78. It is stable at the top speeds (last year i clocked 69.4 mph on their predecesor M82) but still smooth and soft enough to ski slow with my son (love that intelligence). It has a waist of 78mm so it is truly a 50/50 ski so i know that in any condition i will love this ski.
Now, what bindings should i choose. I have narrowed my choices to the Marker Jester (love that wider foot print), Tyrolia HD14 (love the railflex) or the Salamon 914 (Love the driver toe and the light weight). Help!!! I’m never gonna sleep.

We are the East Bay’s only specialty ski shop, specializing in custom boot fitting. We have been selling ski equipment–and ski equipment only–for the past 30 years. We are dedicated to assisting your purchasing decisions with the most highly trained, knowledgeable staff in the Bay; our mission is to ensure your skiing satisfaction!