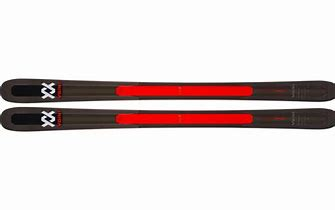 It is hard to get to the top. It is even harder to stay on top. This is the story of last winters most popular men’s ski. The Volkl Mantra M5.

The Volkl Mantra first arrived in 2004. That is a long time. We have employees that are younger than the Mantra. When it first appeared it quickly became a best seller. Last winter, after 15 years, the Mantra was once again the best selling men’s ski in the world. How has Volkl kept this ski on top for so long?

Volkl had been making “Wide” skis for some time. From 1994 into the 2000’s the fat ski of choice for many powder hounds was the Volkl Explosiv. The 90 mm waisted Explosiv were also used as “all mountain” skis by a few very good skiers. Ski anything at Squaw Valley good. The rest of us were very excited about the new “all mountain” skis made for mortals. These were about 75mm wide. Slightly wider than our old skis. The magazines said they were much more versatile. We agreed.

Then came the Mantra. It was introduced at end of the Explosiv run. The Mantra arrived wider than the Explosiv but utilized the parabolic shape that had recently been introduced. The expectation at Volkl was probably to continue to sell skis to powder oriented folks and make it easier to ski other areas on the mountain. Basically a more modern Explosiv. They got more than they expected. The Mantra was a ski that helped lead a revolution.

The Mantra, along with a few other skis coming out proved that fat skis could do more than ski powder. Fat skis could also carve well on firm snow. They just needed the right shape. The revolution had begun. Skiing would never be the same.

Several years of top sales followed for the Mantra. Volkl built a new catalogue around wider all mountain skis. Heck, all the ski brands did. And they still do. The center piece for Volkl on the Men’s side has been the Mantra. This model has outlived all other models. It has carried on through drastic and wonderful changes in ski technology. What a life it has lived!

So almost by mistake, Mantra was a sales leader in it’s younger days. In traditional Volkl fashion it was fun, aggressive, energetic, and competent. To really love Mantra you needed to be a strong and athletic skier. This was a pretty big segment in the market and sales soared. The first few generations of the Mantra followed this general description. Then sales fell off as the mantra had growing pains. Volkl experimented with both waist and camber. This led to some trouble with our staff reviews. “Dissapointed” showed up on a lot of test cards. We did not even stock it for a few years. There were a few generation that fell into this category. Now with the M5 (fifth generation) version the Mantra has matured into a fully developed ski. The Mantra is back on top.

The M5 version brings changes that harken back a bit to the original version. The waistline has slimmed back down. The camber and “pop” is back too. Added to that are features and materials not available several years ago. Volkl nailed it on this one. The reviewers are loving it again. So are consumers. Give your engineers raises over in Germany Volkl. This is their best work in a while. Volkl Mantra again tops the charts in Men’s ski sales for last season.

And that is one way you can stay on top. You can keep updating your design with the best technology available. You can make it easier to ski. Design it just right to carve or float. Use construction with metal for power and dampness. Cleverly minimize the metal and combine it with carbon fiber to keep it light and quick. You can use subtle rocker at both tip and tail allow for super easy turning with amazing edge hold too. That is one way to stay on top. Use technology to keep improving things.

Sound easy? Nope. It is hard to get on top. It is hard to stay on top too. Volkl has put a lot of skis on top since they started in 1914. Since 2014 their answer has been Mantra.